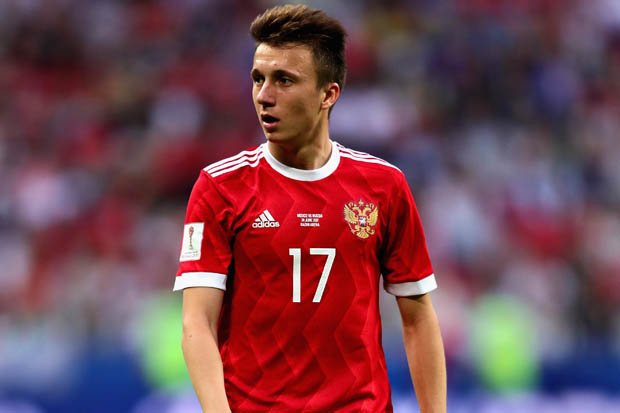 Golovin played the entire duration of the second half as Monaco sealed a 2-0 away win over Lyon in their French Cup quarterfinal clash on Wednesday courtesy two second half goals from Frenchman Wissem Ben Yedder (penalty) and Kevin Volland within the space of seven minutes.

Russia player Golovin was an halftime substitute for young midfielder SofianeDiop and he went on to play his part in the impressive win over Lyon who finished the game with ten men following the dismissal of defender SinalyDiomande. The Lyon player was given his marching orders on 51 minutes after he received a second yellow card for a foul in the box. Ben Yedder then tucked away the resulting penalty three minutes later.

German striker Volland scored the second goal of the game after good work from the impressive Ben Yedder to wrap up the game for his team. With the 2-0 result, Monaco have booked their place in the last four of this season’s French Cup.

Russia player Golovin and his AS Monaco team are joined in the last four of the competition by fellow top flight teams PSG and Montpellier. Amateurs RumillyVallieries are the fourth team in the semis after the big win over Tolouse in the quarterfinals.

Holders Paris Saint Germain (PSG) are the team to beat in the French club. They have won five of the last six editions of the French Cup. PSG showed their intention to retain their title with an emphatic 5-0 victory over Angers in the last round. Argentine international Mauro Icardi scored three goals during the game.